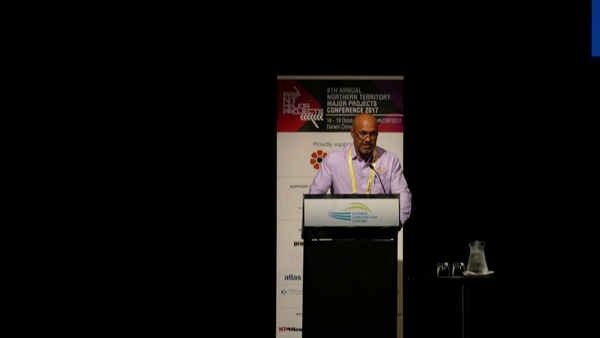 On the 18th and 19th of October over 250 attendees convened at the Darwin Convention Centre for the 8th Annual NT Major Projects Conference 2017. Speaking at the conference were Ministers, CEOs, Directors, Chief Executives, Managers, Consultants and many other high-level professionals. All had gathered to discuss the future of the NT, how their major projects can contribute to this and how to make the region a more liveable location.

Day one started with Hon. Michael Gunner for a passionate ministerial address. Gunner discussed that the Northern Territory is involved in some of the “most significant major projects in the country” to improve various industry sectors.

After the one of many opportunities to speed network, Terry O’Connor, Chief Executive Officer of Darwin Port, was welcomed to the stage to present on the Darwin Port Upgrade. With $150 million worth of redevelopments and new development coming, O’Connor spoke on how the strategic plan aims to collaborate with as many local trades as possible.

A stand out presentation came from Alastair Shields, Chief Executive Officer Department of Tourism and Culture NT. Shields expanded on the significant investment plans to create not only more local jobs, but to also make the NT a “world-class tourist and cultural destination”. He also explained plans to pair the proposed Art Trail with existing structures like the Explorers Highway, the Darwin to Alice Springs section of the Stuart Highway. Lastly, Shields added that there had been no confirmation of location for the proposed $50 million Museum of the Northern Territory at Myilly Point or the various locations along the $100 million Arts Trail.

One development that does have a location is the Chandler Facility Project. Richard Phillips, General Manager Transport & Civil Services Tellus Holdings, outlined aims for the project that is situated 120 kilometres north of Alice Springs. Costing over $676 million, the facility will encompass a salt mine and underground water storage areas. Estimated to create over 350 jobs during construction phases and when it’s functioning, Phillips described it as a “multigenerational project…and that by storing like with like we will create less waste and stabilise the market”.

Planning for the future was also discussed in the Transport Infrastructure Investment presentation. Louise McCormick, General Manager Transport & Civil Services Northern Territory Government, shared the Governments plans to invest $733.5 million in the Northern Australian Roads and Beef Roads Program, helping to unlock the regions potential. McCormick explained that there are plans to offset fumes created along roads by integrating more greenery into the landscape.

Palmerston Regional Hospital is estimated to open in 2018 and it the first brand-new NT public hospital in almost 40 years. Glen Brady, Project Director Department of Infrastructure, talked on the $170 million project. The facility will encompass 116 patient beds and will be the most technologically advanced medical facility in the territory. Brady explained that during the construction phase there was a focus on transparent communication with the community and their needs, as well as working with as many local tradespeople and products as possible.

Day two of the Conference also kicked off with a ministerial address, this time the Hon. Ken Vowles took to the stage. Vowles expanded on the recent $1.6 billion expenditure into major projects by the Northern Territory Government.

Attendees were excited to hear what Ian Kew, Chief Executive Officer of Northern Territory Airports, had to say on the redevelopment subject. Revealing that the Master Plan had been approved by the various entities needed, Darwin Airport’s expansion and update will now begin. The Plan outlines how the company “will integrate aeronautical and non-aeronautical” uses for the airport to maximise benefits for the surrounding community, NT as a whole and for those who travel to and from the region.

Brian Craighead, Managing Renaissance Energy Renaissance, impressed attendees with his presentation regarding the Darwin Battery Storage Gigafactory Project, or ‘Renaissance One’ as it’s more commonly known. With the ability to create customised hot and humid climate optimised lithium ion batteries, Craighead referred to the project as a “niche player on a global stage”. Batteries made in the facility will be introduced into the commercial and electronic vehicle markets and South-East Asia.

This year’s attendees were privy to these and other comprehensive presentations and panel discussions regarding NT’s future.

The 8th Annual NT Major Projects Conference 2017 was a success and will be returning in 2018. Until then, for more information on upcoming major projects conferences click the link. http://www.expotradeglobal.com/